Music On The Square

Vendor events are quite scary to be a part of.

At least at first.

Music On The Square in New Philadelphia was my third vendor event in the last two years, and I had a great time.

But the initial fear was still there.

Until I met my vendor neighbor. His name was Joey.

He was friendly and I enjoyed talking with him, and he helped me relax.

Setting up was a fairly easy process this time.

I was running late initially, but was lucky enough to find a parking spot close to my vendor area so unloading was easy, and Joey was nice enough to help out.

Setup was easier this time around as well. I didn't bring everything with me.

By "everything" I mean the paintings I have hung up at the Artisans on Canal shop in Bolivar, OH.

But I still had plenty to show. 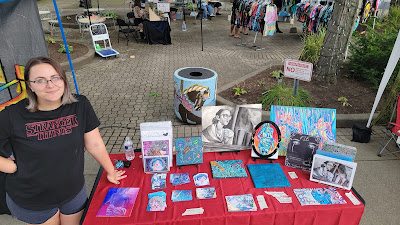 The event was from 3pm-10pm, so I took an old painting I had stuffed in my closet and worked on it to help the hours pass by. 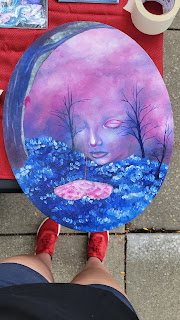 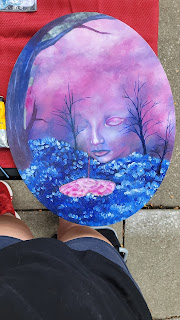 I figured 7 hours would be enough to revamp this piece, but before the painting was even considered "done" a woman came up to me asking to buy it as was.

She didn't want me to do anything further to it, and I sold it to her for 25 dollars.

It's less than I would have initially asked, but she was happy to buy it and I was happy to see it finally find a home.

It was the first time in awhile that I used oil paints, so I was really happy someone took to it right away.
That was a few hours into the event, so I had to find something else to do to pass the time, but I didn't mind.
*
All kinds of people attended the event.
I had great conversation with some, usually at the mention of a cool anime shirt or of my Stranger Things top I had just bought at Walmart that day (if you haven't watched this Netflix show, you need to) and it felt nice to connect with people.
The musicians playing on stage were talented, and the other vendors had some amazing stuff.
I actually ended up buying more than I sold, but being surrounded by so much talent, I really couldn't help myself.
Artists typically support other artists, because we understand each other's struggle- I just go over the top sometimes 😂
*
It was a great event, and I'll definitely be participating again.
As for what the future holds, I've got another event in October- maybe even two, depending.
I am also going to be contacting the Stark County Fair to talk about their Fine Arts show, and I was told to mention a woman named Gloria (she was one of the women I met at yesterday's event).
*
The future holds so many exciting possibilities.
I can't wait to see where life takes me next.
Art art vendor
Skylan Abraham
My name is Skylan Abraham. I'm a 23-year-old woman with an admiration for all things creative. I am mother to three boys and a fiancée to my best friend Jacob. Art has been a part of my life since I was young, and it'll never NOT be a part of me.

Popular posts from this blog

The Name and the Artist 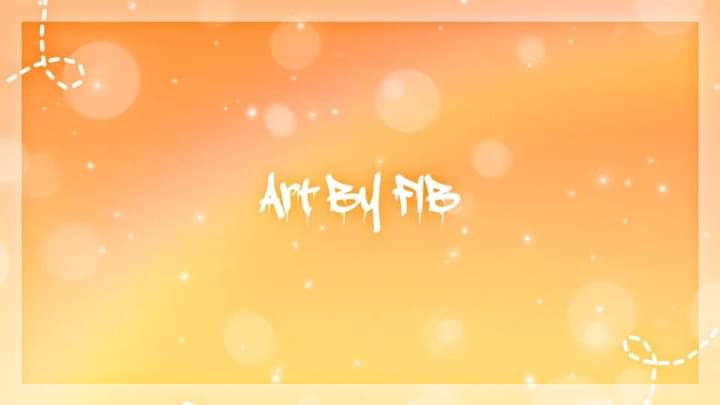 I n the past, I was timid, quiet, easily overspoken. I gave an air of maturity, that I could claim, but that description no longer fits me. Don't get me wrong, I'm still meak, mature even, but what now lays underneath that veil also lies someone willing to change, to take courage, and speak up for herself and for the vulnerable mother that she is, that I am- unsure of where I should take my next steps in life as an independent woman, and to what direction I should travel in the journey to guiding my children. I want to communicate, connect, have fun and enjoy life to the fullest of my capabilities. I want to be unafraid, encouraged, and motivated. I want to be the best version of myself possible; making progress one day at a time.                                                         * * * Y ou might not suspect my timidness or my worries upon first greeting; I'm of Slovakian build with wide shoulders that make me appear intimidating and, paired with an overall thick bui
keep reading »

I understand how the whole "my passion found me" line seems like a total cliché but it does have its merits. In my 23 short years, I've only experienced true, soul-serving, focus-obsessing, work-encompassing passion once in my life. I've had plenty of interests run across my plate but nothing had ever wet my palette as much as art had.       I t started as a small flame and grew into an uncontrollable need to create and improve as I did so-- here is why I'd describe it as a passion finding me: I had been scrolling through Netflix, you know, as we often do, attempting to find a new show to watch, and I found myself stuck on this cute Japanese animation. It was the first one I'd ever watched, but there was just something about it that I couldn't take my eyes away from. T he lead, I found, was everything I wanted to be. She was kind-hearted, accepting, loving, a hard worker, hopeful; the ideal daughter and friend. Not that I wasn't any of th
keep reading »

* A uthor Tidbit* Happy Day everyone!! Wow, doesn't time just seem to pass by so seamlessly these days? It's already the day of our fifth artist feature! I know that doesn't sound like much when they're still are over 100 to go, but slow progress is still progress and should be celebrated all the same! With that said, let's get on with today's feature! 😊*       T oday's artist has a knack for creating the cutest designs, with a little humor tied in: allow me to introduce artist Tianna Almy .            I can't place the reason why but I felt the above artworks fit best with a poem: Pastels, pastels, happy yellows, greens, blues, pinks, and purples, jubilee! Colors so bright yet soft you see, within them, happy faces smile at me-- I smile in return, my mouth can't help but react; AWWW, how lovely are these, how sweet their owner must be, to draw such sights  into life, and bring their joy and words of wisdom, and humor into mine.      I' m
keep reading » 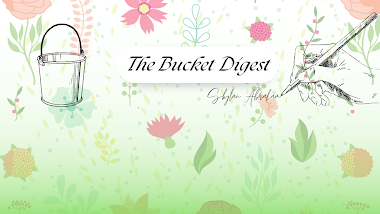 The Bucket Digest is an Art Focused site. Discover unique artists, hear about vendor and shop experiences, learn how to paint yourself, and look at and discuss art from the Greats